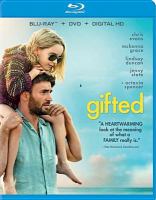 They can still make good movies if they choose to.

Backed hesitantly into this film, which my wife reserved because of Lindsay Duncan, who we liked in About Time and Lost in Austen. Once underway, it sure held our attention. The cast chemistry is excellent between and among the players, and a couple of never-saw-this-coming twists only added to its appeal. If you're trying to decide whether to reserve Gifted or not, I encourage you to take a leap of faith and do so.

I thought Gifted was a really solid film. The cast and story were great in my opinion.

Cute, clean movie about a man raising his genius niece. I enjoyed it. Interesting that the actress playing the young girl has also played a genius on the TV show Young Sheldon.

I Love this movie. Too bad the main Male character got dumped on so badly by everyone around him. Other than that it's heartwarming and heartbreaking in various points and definitely worth looking at.
The child actor is simply amazing, and must be gifted herself! A stellar and award winning performance, no question.

A total 10. One of best movies ever made. Great acting and casting. This movie will make you cry and make you laugh. The part played by the girl is a person with 100 percent talent. This is how great movies are made.

Beautiful movie. Some say the ending is sad but I do not think so. Gifted kids are a blessing.

I enjoyed watching this movie because it shows that a child is a mathematical genius. It reminds me of my brother because he also loved math. After watching this movie, I wondered how can a genius balance out the complexities of life. I mean you want to a social being and get along with your neighbors and at the same time you want to grow intellectually. In this movie, Mary is the little first-grader who struggles to blend in and be a normal child. Her classmates are learning to add 1 plus 1 while she is learning about mathematical integral problems. ****The best part of the movie is where you goes on a university campus and solves a complex mathematical problem from Professor Shanklin. After this scene, Mary's life goes downhill because the judicial court places Mary in a foster home.

Frank Adler: This is gonna be fun. You're gonna meet kids today you can borrow money from the rest of your life.

For my Show and tell I have... the most awesome cat in the history of times.
Not only is his name Fred, but... He has just one eye. Uno. Go ahead and count... but I promise you is always one.
===
If anybody takes that baby away, I'll smother you in your sleep.
===
I have a very strange kid.
-I have 27 strange kids.
===
You're still stubborn and vindictive.
-Careful, Mother. There's an apple and tree analogy lurking.
===
And I think the last thing that little girl needs... is reinforcement that she's
different. ... But a 12 year old bullies a 7 year old and she stands up? Do you know how important that is to me that she did that? You know how proud I am of her? Aren't you? ... I know. You can't hit people. That will be made very clear. I get that. But Miss Davis, if we separate our leaders... If we segregate them from people like you and me... you get congressman.

Frank, please listen to reason. At some point, are you gonna get to conclusion... or someone in authority are going to spell it out for you... that the child best interest is all that matters.
===
I wear sunscreen.
-Not enough. And you need a hat. A big hat that shades your face and neck.
You're playing Russian roulette with your skin. You look like porn producer.
===
Here's an idea. Stop thinking about me and you... and start thinking what's best for a child. For any reasonable person, a clear picture will emerge. If it doesn't, I suggest you call your attorney.
===

I can provide for her. I can enrich her life.
-Come on, Evelyn. You're gonna take that girl, you are gonna bury her in tutors... The you'll loan her out to some think tank where she could talk non-trivial zeros... with a bunch of old Russian guys for the rest of her life. And you'd bury her under a rock.
-Look, I didn't expect you to understand the price you have to pay for greatness.

No more math today.
-Is there a God?
I don't know.
-Just tell me.
I would if I could. But I don't know. Neither does anybody else.
-Roberta knows.
No. Roberta has faith... and that's the great thing to have. But faith's about what you think, feel. Not what you know.
-What about Jesus?
Love that guy. Do what he says.
-But is he God?
I don't know. I have an opinion. But that's my opinion and I could be wrong.
===
There was a guy on TV who said there was no God.
-The only thing different between the things you saw on TV and Roberta is Roberta loves you. She tries to help.
===
And your Honor, as far as the living conditions... I've been in this home.
It's fine. I mean, if we adopt standards based on our friend's aversion to palmetto bugs... we won't have a child left side of Tallahassee.
===

These are Millennium problems. Seven great and meaningful problems.
Some mathematicians have worked their entire lives to prove them.
-Who's the dude with the beard?
That's not a dude. That's Grigori Perelman. He proved Poincare conjecture.
The only one of the seven proved.
===
Do you really have no life because of me?
-That's not what I said.
Did you mean it?
-Last week you said I was the worst uncle in the world... and you wished the dead of me, cause I didn't buy you a piano. Did you mean that?
No... Not entirely.
-There you go. We say things all the time we don't mean.
===
Would I like to have Mary tonight?
-I'd like to have Mary every night.

Frank says I'm not supposed to correct older people. Nobody like a smart-ass.
===
This is gonna be fun. You're gonna meet kids today you can borrow money from the rest of your life.
===
I knew that guy was gonna have a beard, before we even went in there. Math teachers like to grow beards.
===
He can be pretty annoying, but he's a good person. I think.
-Why do you say that?
He wanted me before I was smart.
===
Is Roberta your only friend your age?
-Roberta's not my age. She's like 40, 50... 30-something.
Roberta's grown woman?
-People my age are boring. Roberta's cool.
===
And I'm supposed to believe you know what you're doing. You couldn't even find a white lawyer.

Well, your stepfather is in Montana. He bought a ranch.
-Bullshxt.
Exactly. A man whose idea of roughing it... is being too far from the ice machine at the Ritz's Carlton, now owns a 1000 acres of grass and dung.
-Walter Price is a cowboy. Walter Price puts Brooke's brother suit to take out the garbage?
He has a cowboy hat and cowboy boots... and a horse that doesn't know
dressage.
- Is there some logical reason for this?
Midlife crisis, apparently.
- He's 70.
I know. Must have been on time delay or something. I guess I should be happy it wasn't 25 year old cocktail waitress. But than again an affair you can
explain to friends in a minute. For this, you put on a pot of coffee.
===
She gotta go out in the world. She has not friend her age. No social skills. She doessn't know how to be a kid. Two nights ago she told me that even if Germany bails out the euro, there could still be worldwide depression. I was staring at the ceiling for three hours. I'm so worried.

Diane was not like regular people. She was extraordinary. And extraordinary people come with singular issues and needs. You have no idea of capability
she possessed. One in a billion. And you would say: " Fine, let's throw that away, so the boy who cuts our yard can make sexy conquest. Well maybe before you make that decision, you stand in my shoes. I had responsibilities, which are beyond the mother-daugther relationship. The greateest discoveries, which have proved life on this planet... have come from minds rarer than radium. Without them, we'd still be crawling in mud.
===
If I got one for three, I'm in the Hall of Fame.

What is this book?
-Discourse on Method. Rene Descartes.
What's it about?
-Existence.
Existence?
-Yup. " I think, therefore I am".
Well, of course you are. That's obvious.
===
She's not normal, but if Einstein can ride a bike so can she.
===
Her lawyer has a nice suit.
-Relax Frank! More weight's put on the talent competition.
===
You're going to a brand new school. A better school.
-I don't want to. I want my crummy school.
===
This is a mistake. We'll never be able to raise this child... to the level of scholarship she deserves.
- Well... just dumb her down into a decent human being. Everybody wins.
===
Diane understood she was accountable for the gift she'd been given. And she didn't shy from it. And I think, if she were here today, Mr. Attorney, she would refute your baseless insinuations, that she would give up her brilliant future and take her own life just because her mummy didn't get her a little red wagon.

Gwen904 thinks this title is suitable for 12 years and over

kpelish thinks this title is suitable for 7 years and over

wth_this_sucks thinks this title is suitable for All Ages

ilovewhippets thinks this title is suitable for All Ages

Violence: Mild violence as the main character defends a schoolmate and breaks a bully's nose; emotional fireworks in a bitter court scene.

Wiki write-ups on the Trachtenberg method, Navier-Stokes equations and the Millennium Prize Problems: