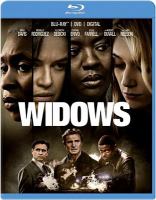 This thriller turns out an unrealistic, unbelievable heist story, if not ridiculous flop.
Totally disappointing, though acting appears superb.
Even a good director could NOT make a good movie out of a bad script.

Lots of nasty men, lots of "sharks" ready to eat little fish... she assumed the wives had same talent as husband, which led to mistakes.
Might love or hate, but plot moves along.

Good mystery. Good cast. Interesting story. Great to see powerful women not scream and flinch when caught in the messiness of life.

I enjoyed watching 3 chicks on the take. I love watching Michelle Rodriguez anyway, so that was a no-brainer for me. It is a rather dark film, lots of violence, some swearing. Clean gals going to the wrong side of the track, so to speak. A successful heist is fine in its own right, but most of them stay on the FBI books till they are solved. But the film is still fun to watch.

I did not care for this movie at all - seemed highly contrived.

I thought this was just an alright movie. It plodded in places, revealing the obvious ending far too early. It could have had a more attractive cast. Keep the FF button handy for the endless dialogue scenes.

I liked this movie but I didn't love it. It was definitely entertaining. I liked the fact that it was a heist film starring women. I liked the basic plot about four disparate women joining forces and taking their power back. There were lots of twists and turns and it was suspenseful. I thought the performances by all the of the lead actresses were great. I found the plot a little messy and bit all over the place. There seemed to be a lot of complex social issues that were being touched on and introduced, but never really dealt with with any depth. The film seemed to be trying to cram too much plot into two hours. And the behavior of many characters was often kind of bewildering. So overall I enjoyed it and I thought it was good, but it didn't quite fulfill its potential.

Really enjoyed this movie i wished that i would have gone to the movie theater and supporting this film. The next Steve Mc queen movie i will definitely support it.

I thought it was an efficient, heartless thriller. Sort of variation on Thelma and Louise but with less interest. Steve McQueen is every bit as proficient as Sam Fuller and Sam Peckinpah were in setting up violent scenes with some emotional payback, but it's not great filmmaking. Viola Davis's part does not call for much deep acting, Elizabeth Debicky and Michelle Rodriguez are used mainly for exotic colour. Colin Farrell as the cynical young politician does best with a wordy script. If your library has The Asphalt Jungle, or any other classic heist movie, you'll have a better time.

Veronica: We have a lot of work to do, crying is not on the list.

Some quotes in IMDb. These are focused on Chicago politics:

Most people don't know what an alderman does... including a fair number of aldermen. It comes from the Old English, meaning "older man." When I was a younger man, Facebook... Back then, a face was something you tried never to forget.
===
The Mulligans have run the 18th ward for 60 years. My grandfather, my father. These days it's all about name recognition.
===
Nepotism isn't illegal. It's actually celebrated. This is Chicago.
===
You know how many shootings happened in this city last weekend alone?
Thirty-four! These people are killing each other! This is not where I wanna raise my children.
===
What are you gonna do? Work in a bank? Take the train downtown, punch a clock? This is your life! This is our life. It's what we do. Everyone has a fxcking sob story, most of them better than yours. So, if the idea is to be mayor one day, you'd better man the fuck up!

Alderman of this ward makes a $104,000 a year. ... But then you add in the juice, right? He gives his friend a contract for a new building, gets a kickback. Gives his brother a contract for construction. Hell, he give his mama a contract for construction. That man owns a piece of every fucking thing. The only people coming after him, they got cameras and microphones. People coming after us with guns.
===
I'm a proud sixth generation Chicagoan. We laugh louder, we work harder, we sleep to the rattle of the "L" train.
===
I always said he should burn in hell. But, hey, Chicago'll do.
===
Mom, you always say a gun is a girl's best friend.
===
Look around you. It's like Custer's Last Stand. It's kill or be killed. Now, listen to me, son. Listen, we made this city. We're not having it taken away from us
by people who come here illegally... or by people who can't stop, you know...
making babies. That means staying in power... at all costs. You got that?

There are no age suitabilities for this title yet.

There are no summaries for this title yet.