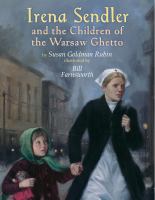 Irena Sendler and the Children of the Warsaw Ghetto

Using toolboxes, ambulances, and other ingenious measures, Irena Sendler defied the Nazis and risked her own life by saving and then hiding Jewish children. Her secret list of the children's real identities was kept safe, buried in two jars under a tree in war-torn Warsaw. An inspiring story of courage and compassion, this biography includes a list of resources, source notes, and an index.
Publisher: New York : Holiday House, c2011.
ISBN: 9780823422517
0823422518

I have read most of the books available on Irena Sendler now. This one is suitable for 3rd graders or so. Some of the facts included vary a bit from the other books I have read. Specifically regarding her escape and who was with her when she was arrested. There are addition details and examples given regarding the children's escapes which I do not believe I had read elsewhere. There is a significant list of resources indexed for this book. Particularly since th3 book is 37 pages with illustrations that are full page in size.

There is no intense language. The only hint of intense scenes are regarding Irena's arrest, interrogation . and escape. These are all very mild though.

Too few know of Irena Sendler ,This is the story of the Polish social worker who helped nearly 400 children out of the Warsaw Ghetto during WW 2 . Using toolboxes , ambulances , coffins and other ingenious ways. Sendler's story of courage is told with illustrations done in oil paintings and is an inspiring biography.

The subject of heroism is further explored in the beautifully-illustrated, true story of Irena Sendler, a young Polish social worker who helped approximately four hundred children escape from Nazi soldiers – and almost certain death - during World War II.
When Poland surrendered on September 28, 1939, Nazi soldiers rounded up Jewish families and forced them to live in ghettos located in cities such as Warsaw. There, poor sanitation, a lack of food and overcrowding soon resulted in deadly epidemics, such as cholera. In 1942 the Nazis started to empty these ghettos, herding Jewish children and adults into cattle cars going to Treblinka, a death camp, where those who hadn’t already succumbed to sickness or starvation would be put to death.
Irena’s heart told her that despite the certain danger and risk, she had to do something – and she did.
She became a member of the Council for Aid to Jews, a new underground organization. Disguised as a nurse, Irena would enter the Warsaw Ghetto and smuggle out children in any way she could devise. With the help of other Council members, some children were smuggled out in ambulances, hidden under stretchers and floorboards. Some were concealed in fire trucks. Some were hidden in sacks, body bags or coffins, supposedly en route to the Jewish cemetery. Occasionally, some of the children escaped through the city’s sewer system in a precisely-timed, well-rehearsed operation. Sometimes, babies were even smuggled out of the ghetto in potato sacks, suitcases or toolboxes.
Parents of these children made the heart-breaking decision to let their offspring go, knowing that otherwise they would face almost certain death. Irena kept a list of the escaped children and their parents, in case they could be reunited after the war – and in a few cases, this did happen.
For the 5 ½ years of the German occupation of Warsaw, Irena continued her dangerous work, despite being arrested once by the Nazis and almost put to death.
Irena’s story is one that certainly deserves to be told and read.
It is the story of a true hero.

There are no notices for this title yet.

There are no quotes for this title yet.